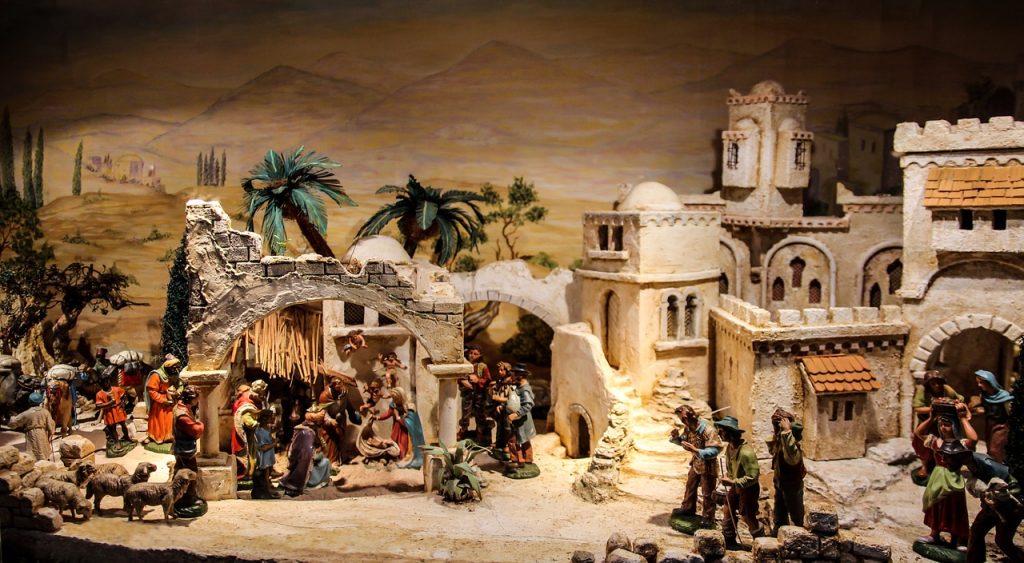 The Real Meaning of Christmas

What the Incarnation Means for Us

All these things, and especially the celebration of Jesus’ birth, have something to do with Christmas. But the full meaning of Christmas is something bigger – bigger than the love of our families or good will toward men, even bigger than remembering the birthday of Jesus. For when we celebrate Christmas, we are celebrating one of the greatest truths of our faith – the incarnation. We are not just celebrating the fact that some 2,000 years ago Jesus of Nazareth was born; we are celebrating the far greater fact that in Jesus of Nazareth God himself became man.

Most of us are familiar with the word ‘incarnation’ and know that it has something to do with Jesus’ being both God and man. But many of us have not reflected on the full meaning of this doctrine and on the consequences it has for us.

Among Christians today you can hear a lot of strange things said about the incarnation. One common idea is that the Word became flesh to show us that we really ought to be flesh. The meaning of the incarnation, according to this way of thinking, is that we ought to be as much flesh as we can possibly be.

I do not know about everyone else, but I at least do not feel that I need to become any more flesh. Nor does anyone else I know really need to become more flesh. We human beings were born flesh. We do not need to do anything in order to become flesh – whether flesh in the good sense or in the bad.

Some of the early Christian teachers in the Greek-speaking world spoke of the incarnation in quite different terms that I believe come much closer to what the scripture itself says. They said that the Word became flesh – God became man – so that we might become God. That is a spectacular statement and could easily be misunderstood. But compared to the modern notion, I think it gets us a lot closer to the truth.

How does the incarnation make us more like God?
To begin with, we should understand that the incarnation is not simply a call to imitate God. The Word did not become flesh just to give us a model of godlike behavior. Of course, if we are going to become like God we have to imitate certain elements of God’s character as they are revealed to us in Jesus – his love, patience, strength, perseverance, and so on. But the incarnation means more for us than that.

The truth is that God became man in order to make us godlike. He came to give us something that would make us like himself. God became man because we did not have it in ourselves, in the weakness of our flesh, to become like God.

We may find all this easier to understand in terms of another idea the New Testament gives us: God became man in Jesus Christ, and as a result of that incarnation God has poured out his Holy Spirit on us to give us the power actually to live the life of God. He has poured out his Spirit so that there may be a body of people, the body of Christ, who truly live like God himself. Other people should be able to see us and say, “Here is a type of human being different from all other human beings. Here is a kind of life that no other human has.” What they should be able to see in us is the very life of God himself.

The Word of God becoming flesh and dwelling among us
The Gospel of John states these same truths in another way: “The true light that enlightens every man was coming into the world. He was in the world, and the world was made through him, yet the world knew him not. He came to his own home, and his own people received him not. But to all who received him, who believed in his name, he gave power to become children of God; who were born, not of blood nor of the will of the flesh nor of the will of man, but of God” (John 1:9-13).

That passage describes the incarnation – the Word of God becoming flesh and dwelling among us. He was not recognized by most people, the passage tells us. He was rejected even by many of his own chosen people. But we who do receive him receive a new life, a life as children of God. We have been born in a different way, not by natural means but by the Spirit of God. We have been born with a life that puts us on a different plane than our natural life. That is an extraordinary truth.

How many times have we heard those first verses of the gospel of John? How many times have we heard about God becoming man and our becoming children of God? It is all so big that we almost stop thinking about it. If we do think about it, we think of it as something that happens in some “spiritual” world, not here on earth where we live our normal life. Here we have enough to do, just trying to get dinner on the table for the family, or trying to get to work in the morning, or wondering when to do the Christmas shopping, or how to get the car fixed so we can visit the family on Christmas Day.

Maybe, we think, being children of God in the midst of all this just means that we should be a little kinder to our wife, or stop getting irritated with the kids, or try to relate to our boss better. It is easy to end up thinking that Jesus came just to tell us that we need to behave a little bit better than we are naturally inclined to behave.

It would be easy to misunderstand what it means to say that Jesus came to make us godlike and give us a life different from other human beings. We could take that as meaning we become something more than human. I think it is more accurate to say that we become fully human. If we are to be truly human, if we are to be all that a human being is meant to be, we need the life of God.

Our condition as we are born into this world is actually subhuman. That is not a slight on our parents; it simply reflects the fact that the human race itself is under the power of sin. The present “natural” condition of humanity means living according to sin, living in the flesh as Paul used the word flesh (see Rom. 7:13-25).

In the image and likeness of God
That was not, however, the condition in which God made us. When God made Adam, he did not make a sinful man. He did not intend his creation to live the way most people live now. He made us to live a life like his own; he made us like himself. That is what scripture means when it says that human beings are made in the image and likeness of God (Genesis 1:27). Human beings are supposed to be something a lot greater than what most of us are right now.

Jesus wants to share God’s glory with us. He wants to glorify us so that here and now we can start looking like God himself because we live the life of God himself. He wants to restore in us the image of God.

At the beginning of this article, I said that Christmas is not simply a celebration of the birthday of Jesus. That may seem a rather strange idea, since Christmas is the feast of the Nativity, the birth of Jesus. What I mean, however, is that in celebrating Christmas we do not just look back to what happened 2,000 years ago when Jesus entered our world; we also look forward to what will happen when Jesus comes again to complete the work of the incarnation.

Obviously, none of us have yet achieved the fullness of the divine life Jesus came to give us. We can experience much of our new identity as children of God right now, in our life on this earth. But there is a great deal more we will not experience until the Lord comes again to judge the living and the dead and to establish his kingdom.

On that day, what we truly are will be revealed, and as John says, “We shall be like him” (l John 3:2). It will be manifest that we are truly sons and daughters of God, bearing his image and likeness, bearing his glory. Everything that was to be accomplished by Jesus becoming incarnate will be accomplished. Everything God wants the human race to be, we will be.

On that day the true and everlasting feast of Christmas will begin.

Steve Clark is past president of the Sword of the Spirit and founder of The Servants of the Word. Copyright © 1980 by Stephen B. Clark. Used with permission. Taken from Living Bulwark December 2015/January 2016 Edition.