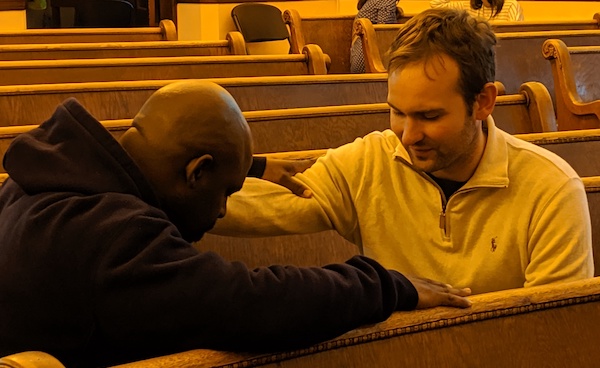 – by Carmen Dahlberg and Michael Davis

Several dozen are gathered behind the sanctuary of Southwest Detroit’s Messiah Church, and the energy is palpable. Today, Detroit Community Outreach (DCO) launches its third round of commitments as a community. As in the previous two years, the commitment is short-term: in one year, its members will gather once again to renew their covenant to each other, wiser still to Detroit’s own flavor of covenant community. 24 adults make this commitment today, surrounded by friends and guests worshiping and seeking the Lord together on a beautiful September afternoon.

At the helm of the community sits Brother Michael Johnson, who, along with his wife, Lyris, hails from the east side of Detroit and has assumed leadership of DCO amidst Dave O’Connor’s transition to the Philippines. “I’m a watchman,” Brother Michael says about himself. “I watch and pray.” And he does. Prayer and Bible study are the bedrock of his own ministry, Crusade of Deliverance, and he leads DCO with the same zeal for the Lord and His work. He is fervent in prayer, humble in leadership, and tenderhearted toward the suffering.

Alongside him in leadership serve Kathleen Wright, a teacher at Detroit Public Schools; Brian LaLonde, a brother in the Servants of the Word and developer at Servant Systems; Michael Davis, a social worker in child & adolescent community mental health; and Carmen Dahlberg, a marketer who teaches digital skills to lowincome moms. Collectively, they are black, white, male, female, Catholic, Protestant, married, single, fresh, mature, and much in between—a taste of what God is shaping DCO to be.

Having members gathered on this day to commit to another year together is a testament to two decades of the Lord’s work through those He has called to live and serve in the city. The vigor pulsing through the room is both steadfast and young, understanding the sacrifices and resources upon which today is built yet hopeful of what waits around the corner. Over this year and the next several, the members of DCO are working to build intergenerational community that serves and fuels distinct stages of life. In a given month, this manifests as young professional outreach events, family-friendly cider mill outings, in-home Lord’s Days, childcare provided by single community members, game nights, shared dinners, neighborhood prayer booths, and service with YouthWorksDetroit or other ministries throughout the city.

Anchoring a calendar of service and social events are facets of community that look familiar across Sword of the Spirit communities: prayer meetings, Lord’s Days, and dynamic, honest men’s and women’s sharing groups. These are fueling DCO’s long -term vision for a city that can unite in denominational ecumenism and, through that expression of unity , break down racial, socioeconomic, and generational barriers.

We invite you to partner with us in prayer, as so many of you have done faithfully over the years, to bring that vision to fruition. In particular, we crave prayers for unity, wisdom, and true care for one another. Please pray that each of these things begins with DCO’s leadership team, overflows to our community, and spills into our outreach. Join us also in praying for growth that represents Detroit and builds reconciliation through our commitment to ecumenism, worship, and daily pursuit of Christ alongside one another.

Taken from the Sword of the Spirit North America Regional Newsletter November 2019. Used with permission.