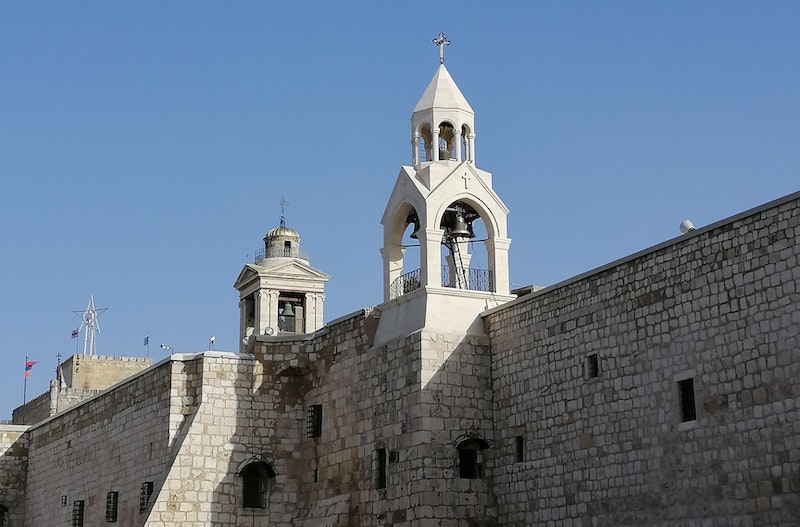 Though small and suffering, we lack nothing.

From the small and lowly city of Bethlehem, the Lord, the Son of God, made his entrance into the world. From the womb of a humble village girl, he took human flesh, and chose to live his humanity in obscurity and simplicity. He became a small ray of light to our eyes, and that light has filled the earth. Out of the obscurity of Bethlehem has come a ruler, the shepherd and guard­ian of our souls. And though he is our shepherd, he became the Lamb who carried the sins of the world that we might be healed.

Though of little significance among the great clans of Judah, Beth­lehem was made great because of the birth of the Shepherd of all shepherds, the King of all kings. Bethlehem, a name that means the “house of bread,” can be a metaphor for the Church that brings to the world the bread of life. The Church, the Bethlehem of today, continues to be the place where the weak, the powerless and the small are welcome because in her each has a place. The gathering of these grains becomes the harvest. The united yeast becomes a powerful force. The concentrated rays become a guiding light.

In the midst of political turmoil, a growing culture of greed, and the abuse of power in this world, Christians, like others in the Middle East, suffer persecution and experience a sense of margin­alization, living in fear of violence and injustice. Yet, Christians, face this fear with hope proclaiming that the Shepherd walks with them, gathering them into one fold and making them a sign of his loving presence. United, they are the yeast that leavens the batch. In Christ they find a model of humility, and from him they hear a call to overcome divisions and to be united in one flock. Though they are few, in their suffering they follow in the steps of the Lamb who suffered for the world’s salvation. Though few they are sure in hope, lacking nothing.

Good Shepherd, the fragmentation of the little flock grieves your Holy Spirit. Forgive our weak efforts and slowness in the pursuit of your will. Give our communities wise shepherds after your own heart who will lead us with righteousness and holiness, to unity in you. We ask you, Lord, to hear our prayer. Amen.

Christian Witness: What Unites Us

I am Garo Saraf, 55 years old, and a member of the Armenian Apostolic Orthodox Church in Istanbul, a church with a history and tradition of 1700 years, with rich spirituality, liturgy, and teaching, passed down from Christ’s Apostles and the Apostolic Fathers.

Following my late father’s guidance since early childhood, I had taken tiny steps which have led to active participation in the life and service of my church.

But I still lacked a personal connection with the Living God, that is until 15 years ago when I was invited to a Life in the Spirit Semi­nar by my parish priest, Fr. Drtad Uzunyan. This was a turning point in my spiritual life as well as in my whole presence and ser­vice within the church’s life and liturgy. All of these became much more alive and life giving.

Amongst many other services, I was priv­ileged to participate in my Church’s ecu­menical efforts. In this context, I worked on a sub-committee of the Joint Commission of Churches in Turkey to translate into English a book called Chris­tianity: Fundamental Teachings.

Istanbul is one of Christendom’s most important cities. From very early on in the Christian era, this city has been a cen­ter of teaching and leadership, and this has influenced many Christian nations. Ecumenical councils, which determined the foundational doctrines of Christianity were held there or organized in the city. Even today, the city has maintained a Christian presence, though a much smaller one. The multi-ethnic mosaic of Greek, Armenian, Syriac, Latin, Chaldean, and Turkish churches, representing every major Christian tradition, displays a vitality that could be a living example for the whole Christian world. These sister churches that come together on various occa­sions have initiated many collaborative projects and events. The book above is one of the fruits of such efforts.

At first, this book was written in Turkish by our Armenian Patri­arch Sahak II in his role in the Joint Commission of Churches in Turkey. Then this commission deemed appropriate that it be translated into English, in order to make it available to the wider Christian world. A sub-committee was formed, and I was there representing both Armenian and Syriac Orthodox churches.

Through this book, all the major churches in Turkey send an important reminder and message to the whole Christian world:  what unites us is incomparably greater than what divides us.

As our Patriarch stated in the introduction to the English version of the book: It is time to stop looking at the black dot on the white sheet and look at the whole page. May the Lord give us all the love and wisdom to do this!