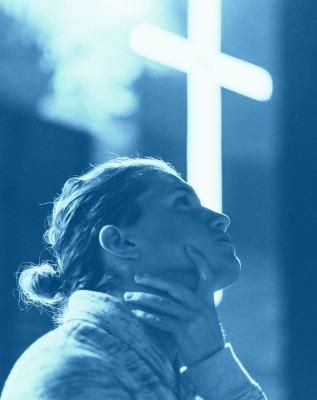 “The Cross symbolizes the life of an apostle of Christ. It brings a strength and a truth that delights both soul and body, though sometimes it is hard, and one can feel the weight.”  (Josemaría Escrivá, The Forge)

“If any want to become my followers, let them deny themselves and take up their cross and follow me” (Matthew 16:24). Most likely Jesus’ followers had seen criminals and insurgents against Roman rule hanging on crosses along the roads of Palestine and knew the horrors and shame of this excruciatingly painful form of execution used by the Romans. So Jesus’ challenging call to his disciples to “take up their cross” must have both scandalized and stunned them. Perhaps they wondered whether, at such a cost, they wanted to follow him after all.

To “take up the cross” means to willingly give one’s life without reservation to Jesus and “follow in his steps” – even to death for his sake, if necessary.

Jesus’ declaration of the conditions of discipleship came after he had foretold his death and resurrection. Peter reacted strongly; he took Jesus aside “and began to rebuke him, saying ‘God forbid it, Lord!‘” (Matthew 16:22). But Jesus rebuked Peter, calling him “a stumbling block,” for Peter was “setting his mind not on divine things but on human things” (16:23). The conditions of discipleship also require us to set our minds on divine things. As the nineteenth-century Spanish archbishop and missionary St. Anthony Mary Claret explained:

The Christian who desires to follow Jesus carrying his cross must bear in mind that the name “Christian” means “bearer or imitator of Christ” and that if he wishes to bear that noble title worthily, he must above all do as Christ charges us in the Gospel; we must oppose or deny ourselves, take up the cross, and follow him.

“Deny” – aparneomai in the Greek of the New Testament – is a judicial term meaning to “disavow or abjure connection with someone or something.” Thus, to deny oneself is to renounce self-interest; to disregard the gratification of one’s own needs and desires; to relinquish one’s own will to do the will of God, imitating Jesus who gave himself over to his Father’s plans for our salvation in total trust. The evangelist Luke adds a detail not found in Matthew’s or Mark’s account of Jesus’ words: “If any want to become my followers, let them deny themselves and take up their cross daily and follow me” (Luke 9:23, emphasis added). Following Jesus is a matter for everyday life – a life of perseverance and steadfastness. Faithful discipleship involves making decisions every day to live Jesus’ way, not our own. This involves making numerous choices and resolutions, even small ones, to serve our brothers or sisters in need, even if that involves foregoing our own needs and preferences. To “take up the cross” we often have to die to self in these seemingly mundane, everyday ways.

In Jesus’ time, the Romans required those who were to be crucified to carry the wooden crossbeam – usually behind the nape of the neck like a yoke – to the place of execution, where an upright beam (called in Latin crux simplex or palus) was already implanted in the ground. Or they shouldered a T-shaped cross formed of both a vertical and a horizontal beam. Roman soldiers had the right to press people into temporary public service, so they “compelled” Simon of Cyrene (modern Libya) to relieve Jesus of his burden, probably because he was so weakened by exhaustion and the loss of blood from the scourging (Matthew 27:31-32; Mark 15:20-21; and Luke 23:26). It is noteworthy that we find the same term – in Greek, angareuo – in Jesus’ Sermon on the Mount: “if anyone forces [compels, KJV] you to go one mile, go also the second mile” (Matthew 5:41). It is when we “bear one another’s burdens” that we “fulfill the law of Christ” (Galatians 6:2).

Thus conscripted, Simon of Cyrene literally took up the cross for Jesus’ sake – and so through the past two millennia, he has been looked to by Christians as a model of discipleship. His unexpected encounter with Jesus must have had a great impact on him, since the evangelist Mark’s mention of Simon’s sons Alexander and Rufus (see 15:21) would imply that they were known to the early Christian church. Through his service to Jesus, did Simon become a believer and true and lasting disciple of his?

Called to be disciples of Christ, we are to follow in our master’s path. Our threefold course of action – denying self, taking up the cross, and following Jesus – sets us decisively on the road to eternal life. Jesus promised that “those who lose their life for [his] sake will find it” (Matthew 16:25). If we hold fast, an everlasting reward will be ours, for when he comes “with his angels in the glory of his Father… he will repay everyone for what has been done” (16:27).

No Greater Love Than This
On the evening before his death, Jesus told his apostles, “No one has greater love than this, to lay down one’s life for one’s friends” (John 15:13). On the cross he gave them the example of ultimate love, dying for their sake and that of all humankind. From the earliest days of the Church to the present, countless followers of Jesus have taken his words and his example to heart, denying themselves and selflessly giving their lives for others.

In Auschwitz, the notoriously inhuman Nazi extermination camp, Franciscan priest Fr. Maximilian Kolbe volunteered to take the place of Francis Gajowniczek, a Polish soldier who had been chosen to be a victim of retaliatory execution for the escape of a prisoner. Fr. Kolbe told the Nazi commandant: “I am a Catholic priest from Poland; I would like to take his place because he has a wife and children.” The commandant returned Gajowniczek to the camp ranks and confined Kolbe and nine other chosen prisoners in a starvation bunker. After being deprived of food and water for fourteen days, Kolbe and three others who were still alive were given lethal injections by the camp executioner on August 14, 1941. Pope John Paul II called Maximilian Kolbe a “martyr of love” and declared him a saint in 1982.

Another profound act of sacrificial love took place on April 30, 1997, when the African nation of Burundi was torn by ethnic wars. Hutu rebels invaded the small Catholic seminary in Buta. Armed with knives, machetes, clubs, and machine guns, the rebels told the young seminarians to divide into two ethnic groups, Hutus and Tutsis. Even though the Hutu students could have saved their lives by separating themselves from the Tutsis, they refused to abandon their classmates. Ultimately, the assailants massacred the forty-one Hutu and Tutsi companions together, “martyrs of brotherhood.”
“No one has greater love than this, to lay down one’s life for one’s friends” (John 15:13).

Excerpted from The Life-Giving Power of the Cross: Sharing in Christ’s Victory, by Jeanne Kun (The Word Among Us Press, © 2011). Used with permission. This book can be ordered online. Jeanne Kun is President of Bethany Association and a senior woman leader in the Word of Life Community, Ann Arbor, Michigan, USA. Taken from Living Bulwark Lent Edition 2013. Used with permission.