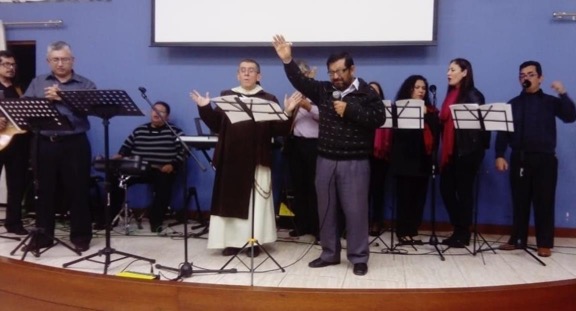 Pentecost 2019 – Together Once Again

LIMA, PERU. Approximately one hundred Christians from Catholic, Evangelical and some representatives from Protestant churches, got together on Saturday the 15th of June in Centro Fiore (the auditorium of the Focolare in Madalena del Mar) to celebrate Pentecost 2019 – Together Once Again.

It was the first gathering organized by a team comprised of leaders of the Catholic charismatic movement and Pentecostal pastors.

In the event, that lasted for about two hours, there was an overall environment of worship, joy, and fervor, which are characteristic of charismatic and Pentecostal communities, which are becoming more frequent in the Peruvian and Latin American church.

The whole gathering was a celebration of unity in the midst of diversity. Not only did they celebrate the presence of God’s Spirit within his people, but there was call toward a stronger expression of unity among Catholics, Pentecostals, and Protestants since they are all children of the same Father and all have been baptized in the same Spirit.

The worship was led by the “Fuerza de lo Alto” covenant Community,  a Catholic community of the Sword of the Spirit; the preaching of the Word of God was done by Alberto Valdivia (Anglican Pastor and Ecumenical Coordinator of  YMCA-Peru) and Father Martín de Porres, from the Beatitudes Community (Catholic).

Both ministers emphasized the importance of Christian unity in the midst of a divided society. Christian witness is believable when it is presented in unity. The Spirit moves in all churches, moving hearts and filling them and guiding them to the common witness of Christ.

The participants prayed for a new Pentecost for the whole people of God and for a stronger sense of unity among Christians. In this ecumenical event, there were various pastors and priests as well as lay leaders from Catholic and Evangelical communities of the Peruvian Capital.

Pedro López, Pentecostal Pastor and a member of the Organizing Committee, said that this event seeks to bring various Christians: Catholics, Pentecostals, and Protestants to be “together once again” to allow the Spirit to be poured upon us, “since he comes when there is a context of unity in the people of God“.

Pentecost 2019 “Together Once Again” concluded with a sharing time in which all participants took time to know each other and have some fellowship together, allowing for new ecumenical friendships.
_____
Adapted from ECCLESIA. Servicio Ecuménico de Noticias. Used with permission.