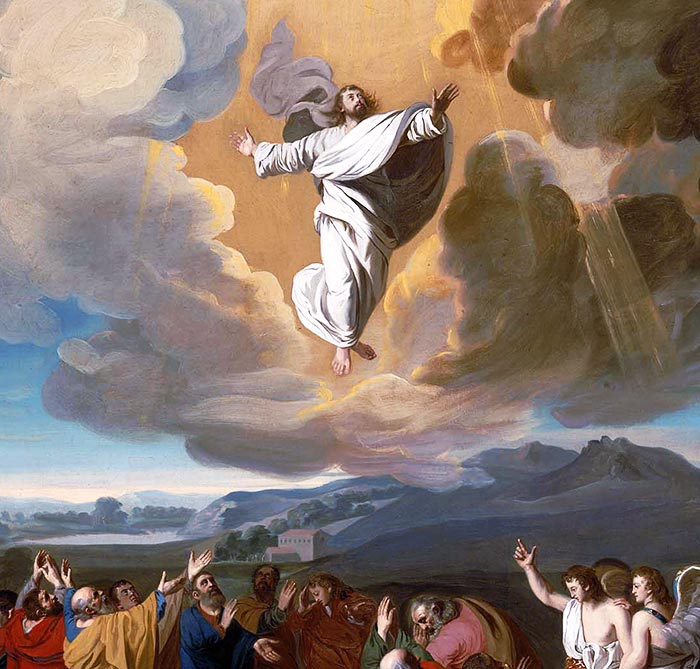 Ascension and Pentecost Participation in the Nature of God 

We have to see the Ascension and the outpouring of the Holy Spirit at Pentecost together, for they are two facets of the same astonishing reality – God making us one with himself. Jesus tells us this clearly in John’s Gospel.

But now I am going to him who sent me; yet none of you asks me, ‘Where are you going?’ But because I have said these things to you, sorrow has filled your hearts. Nevertheless I tell you the truth: it is to your advantage that I go away, for if I do not go away, the Counselor will not come to you; but if I go, I will send him to you.

What did Jesus mean when he said he was “going to prepare a place” for them in his Father’s house? Was he going to make the beds? Tidy up the room? In this brief reading Cyril of Alexandria (b. 376 – d. 444, Archbishop of Alexandria 412 – 444) explains what Jesus was doing for them.

If there were not many mansions in God the Father’s home, he would have said that he was going on before them to prepare beforehand the homes of the saints. But since he already knew that there were many homes already fully prepared and awaiting the arrival of those who love God, he says that he will depart, but not for this purpose. Rather, he leaves in order to secure the way to the mansions above, to prepare a passage of safety for you and to smooth the paths that were formerly impassible. For in times of old, heaven was utterly inaccessible to mortals, and no flesh as yet had ever traveled that pure and all-holy realm of the angels.

But Christ was the first who consecrated for us the means of access to himself and granted to flesh a way of entrance into heaven. He did this by presenting himself as an offering to God the Father, the “firstfruits of those who are asleep” and are lying in the tomb, and by presenting himself as the first human being that ever appeared in heaven. . For Christ did not ascend on high in order to present himself before the presence of God the Father. He always was and is and will be continually in the Father, in the sight of him who begat him… Rather, he who of old was the Word with no part or lot in human nature has now ascended in human form And this he has done on our account and for our sakes in order that he, though “found as a man, may still in his absolute power as Son-while yet in human form-obey the command, “Sit at my right hand,” and in this way transfer the glory of adoption through himself to the entire human race. For because he has appeared in human form, he is still one of us as he sits at the right hand of God the Father, even though he is far above all creation. He is also consubstantial with his Father due to the fact that he has come forth from him as truly God of God and Light of Light. He has presented himself therefore as man to the Father on our behalf so that he may restore us again, as it were, to behold the Father’s face-we who were removed from the Father’s presence by the ancient transgression. . .[1]

The significance of the Ascension is that human nature, body and soul, entered into the presence of God in the Heavenly Jerusalem. As Cyril says, the Eternal Word had always been there, and never left. But now, the Word Incarnate entered into heaven.

Mankind was now exalted to the presence of God.

That’s one half of the story.

With the Ascension, humanity, in Jesus, was exalted to the right hand of the Father. But what about us who are left here below?

“Truly, truly, I say to you, he who believes in me will also do the works that I do; and greater works than these will he do, because I go to the Father. And I will pray the Father, and he will give you another Counselor, to be with you for ever, even the Spirit of truth, whom the world cannot receive, because it neither sees him nor knows him; you know him, for he dwells with you, and will be in you. “I will not leave you desolate; I will come to you. Yet a little while, and the world will see me no more, but you will see me; because I live, you will live also…. Jesus answered him, “If a man loves me, he will keep my word, and my Father will love him, and we will come to him and make our home with him.

The significance of Pentecost is not the spiritual gifts themselves, as valuable as they may be, but the reason why those gifts appear.

Being therefore exalted at the right hand of God, and having received from the Father the promise of the Holy Spirit, he has poured out this which you see and hear.

Humanity, having entered heaven in Christ is now able to receive the Holy Spirit, which Christ received from the Father to pour out on those who shared in human flesh with him. Paul and Peter, Irenaeus, Athanasius, Aquinas and Luther, all tell us this.

May grace and peace be multiplied to you in the knowledge of God and of Jesus our Lord. His divine power has granted to us all things that pertain to life and godliness, through the knowledge of him who called us to his own glory and excellence, by which he has granted to us his precious and very great promises, that through these you may escape from the corruption that is in the world because of passion, and become partakers of the divine nature.

The Word became flesh to make us “partakers of the divine nature.”

Irenaeus: “For this is why the Word became man, and the Son of God became the Son of man: so that man, by entering into communion with the Word and thus receiving divine sonship, might become a son of God.”[2]

Athanasius: “For the Son of God became man so that we might become God”[3]

Aquinas: “The only-begotten Son of God, wanting to make us sharers in his divinity, assumed our nature, so that he, made man, might make men gods”[4]

Luther: Throughout his career, Martin Luther spoke of deification as an aspect of God’s redemption of mankind, and affirmed the Athanasian formula that God became man in order that man might be made God.[5]

This triple movement – the Word becoming man, humanity in Christ ascending to the Father, and the Holy Spirit being poured into us so that we share in the very nature of God – can be illustrated in this simple diagram.

This is an extraordinary reality. Athanasius’ statement is very bold: “the Son of God became man so that we might become God.” We must qualify it by saying that God alone has the divine nature as His own, and we, who are not by nature God, are made partakers in the nature of God. But Athanasius stated this so boldly to impress upon us the extraordinary, unimaginable thing that God has done for us – descending as God to become man and ascending as man that we might live forever united with God by sharing in the very nature of God.

Taken from Living Bulwark May 2021. Used with permission.

Bruce Yocum (1948 – 2022) was involved in leadership and teaching for many years in the Catholic Charismatic Renewal and the Covenant Communities Movement which began in the late 1960s and early 1970s, and in the Sword of the Spirit. He travelled widely throughout the Sword of the Spirit communities to equip and train community leaders in North America, Europe and the Middle East, Latin America and the South Pacific. Bruce Yocum was a life-long member of the Servants of the Word, an international ecumenical brotherhood of men living single for the Lord. He served as Presiding Elder of the Servants of the Word for thirteen years (1989-2003).