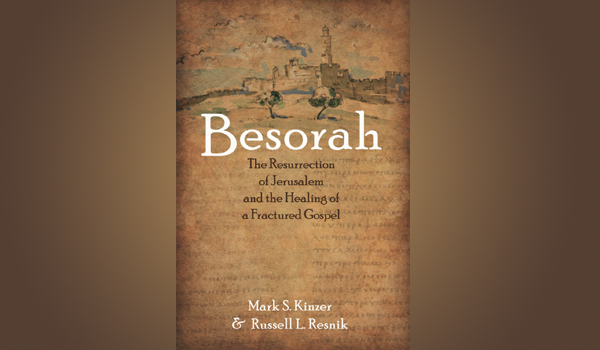 Besorah: The Resurrection of Jerusalem and the Healing of a Fractured Gospel

Watch a video interview of Martin with Mark and Russel here:

Some of us have known Rabbi Mark Kinzer for a very long time, since he was involved in the Servants of the Word and the Word of God in the early days. His output both in teaching and writing has been prolific. Now he has partnered with his friend Rabbi Russ Resnik to publish a book that is short (180 pages), yet packed with information and insights.

The title Besorah is poignant: The Hebrew word denotes news from the battlefield, and for the purpose of this book, it refers to the content of what Jesus came to proclaim. And Mark and Russ use the Gospel of Luke and Acts to illustrate their point. But this is where the familiarity ends for most readers. Even those of us acquainted with Messianic Jews can easily fall prey to what is an essentially a supersessionist reading of the New Testament which goes something like this: the Jews rejected Jesus and his messianic claims, so Jesus and his disciples turned to the Gentiles and started afresh with them. The church is the new temple, the people of God is the new Israel, and the destruction of Jerusalem has put an end to the Old Dispensation. The two authors give a much more nuanced reading of the Scriptures, standing a lot of these supersessionist conclusions on their head.

Starting with Jerusalem, they show that this city, in spite of its destruction by the Romans, has not lost its spiritual significance, not just for Jews, but for all of God’s people. It is no accident that Jesus died and was raised in Jerusalem. The whole account in Luke/Acts is centered around that city, and Jesus seems to indicate in his discourses about the end times that he will return to that city.

In the same way, the book draws a much more sophisticated image of the temple. This holiest of buildings points to realities beyond itself, such as the heavenly temple which is its model, the cosmic temple of all creation – the “temple” of God’s people and the eschatological temple that the prophetic writings speak of. The book argues that even though the temple was destroyed, it was not replaced. It is no accident that Jews to this day pray at the Kotel  (the Wailing Wall) and hope and believe in the temple’s restoration. The early Christians, while critical of an idolizing of the temple, were clearly respectful of this institution and worshipped in it.

Along the same lines, the authors return to a topic which has been dear to Mark Kinzer for many years: Jews who came to believe in the Messiah, far from abandoning the Torah, observed it fervently. In doing so, they followed their master, who himself was an observant Jew, even if he criticized what he considered wrong applications of the Torah, such as the refusal to heal somebody, simply because it was the Sabbath.

Even those readers who have studied and assimilated Romans 9 about the Jewish people’s relationship to salvation will probably be surprised by the heart of the book’s argument. Starting with Peter’s sermon on the day of Pentecost, where he speaks of the promise of “times of refreshment”, the authors point out that God is clearly not done yet with the Jewish people. He did not reject them and decide to start over, as he did with all living things, restarting with Noah after the flood. The authors hold that because of the lack of corporate response by the Jews at the time of Jesus, they are again “in exile”, the glory has departed (see Ezek. 10:18-19). But that means that the glory will return, and the exiles will return. In other words, a key part of God’s plan is the restoration of Israel.

One of the arresting lines in the book says, “Israel’s repentance is a sufficient and necessary condition for Messiah’s return.” This is where Besorah packs the biggest punch, at least for me: suddenly the Second Coming and all my eschatological expectations are blown wide open – or at least significantly expanded – by the notion of all that God is seeking to accomplish with the Jews before he wraps up creation. The authors also address key historic phenomena – Zionism, the recapturing of Jerusalem by the state of Israel, and the development of the Messianic Jewish movement – and what these signify about God’s timeline.

The book ends where it started, with the besorah, the “news from the battlefield”. As the authors proceed with their presentation, we instinctively begin to realize that another of our more or less conscious beliefs is  supersessionist – that our goal as Christians was simply to preach to the Jews and have them recognize Jesus as their personal savior. In light of what the authors outline, things are not quite as simple as that. For starters, they argue that Christians should want Jews to keep their identity, rather than relinquish it, as they recognize Jesus as their Messiah. That the presentation of the “Good News” looks a bit different when we speak to Jews than when we speak to Gentiles, and that the message Christians have proclaimed for centuries was, in the words of the book, “fractured” and that a part of God’s goal is to heal this fractured besorah and thus also heal the fracture between Jews and Christians.

For people like ourselves who are part of a movement with an ecumenical call, it is of foremost importance that we grow in our understanding of what God intends to do with the Jewish people. As the late Fr. Peter Hocken said so often, God is not just interested in healing the rift of the Reformation and that between East and West, but also the oldest of them all, the “rift of Jerusalem”. This book is important – perhaps essential – to us in understanding how the healing of that rift can be accomplished.

Martin Steinbereithner is a member of the Servants of the Word, an international and ecumenical brotherhood of men living single for the Lord in the Sword of the Spirit.

You can purchase Besorah at Amazon