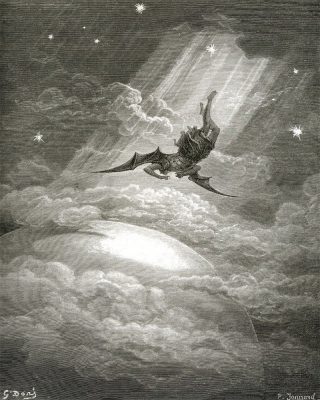 The devil does not have full power

Among the angelic powers the chief of the terrestrial order, the one to whom God had entrusted the task of looking after the earth, was not evil by nature, he had not received any trace of evil from his Creator. He was good.

However, he did not maintain the light and the honor that God had given him. By a deliberate act of his own free will, he rebelled against the Creator. He turned his face away from goodness and fell into evil. Evil, in fact, is merely the absence of good, as darkness is the absence of light.

A host of angels placed under his command followed him in the fall. Despite their angelic nature, they also freely plunged from goodness down to evil and became wicked.

The devils cannot do anything against us without God’s permission. But with God’s permission, they are powerful. All wickedness, all the passions are inspired by them. But listen: God allows them to suggest sin to a person, but they cannot force him to do it. We ourselves are responsible for accepting or rejecting their seductive suggestions.

Taken from ‘Reading Series from the Early Fathers on the Evil One‘ on the Living Bulwark July/August 2011 issue. Used with permission