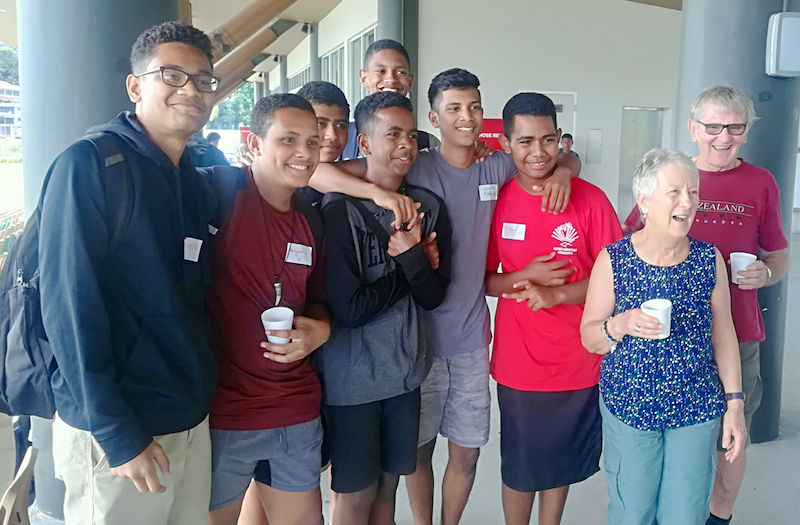 Roger and Veronica Foley, leaders in the Lamb of God community in New Zealand, together with a group of young people from the community, traveled to Fiji in the month of August, 2018 for two weeks of intense mission, meeting with various Christian Leaders and helping run two youth conferences.

We have two communities in Fiji: Patmos in Suva, the capital city, and Lamb of God Nadi, in Nadi in the west of the country.  Both communities are supported by the Lamb of God in New Zealand and by the wider Sword of the Spirit.

The team arrived at Suva, Fiji on Monday the 13thof August around noon to visit the Albert Park venue facility and meet with the Patmos Community team.

The event began early on Tuesday morning and went through to mid-afternoon Thursday. It was a real success, averaging about 85 people attending each day. The singing, the teaching, and the relationship building was richly blest.The Patmos Team did an excellent job in serving.

The Event was significantly ecumenical in representation with seven church groups participating: Methodist, Catholic, Anglican, Gospel Church, Christian Mission Fellowship, Assembly of God and Orthodox. What a promising future for the next generations. God is surely at work.

The Nadi Youth Event  started Friday afternoon and concluded early evening on Sunday the 19th. It was hosted at the International Christian Fellowship Church, Votualevu, Nadi.

It had an average attendance of about sixty people each day.Again, the worship, the talks and the building of relationships was excellent.

The participation at this event was almost entirely Pentecostal (only five out of sixty were not from Pentecostal churches).

Celebration!
Adding both conferences, there were around 150 attendants to both events, each day. A great blessing was that, once again they were able to run the Suva Conference free of charge to attendees.

At the end of both conferences the team had a traditional ‘feed up’ at the somewhat famous ‘Mama’s Pizzas’.The pizzas are huge! And yes, they failed to finish and surrendered to the overflow being boxed for later consumption by a hard working youth team.

Making good use of their checked baggage allowance, Roger and Veronica brought many gifts: 25 blocks of chocolate, many tins of Nivea Cream, donated clothing, a keyboard, a donated laptop, many donated Bibles and a large library of Leadership Training Materials and Courses for the training of Pentecostal Leaders.

After the conferences, they stayed in Fiji for a few more days, during which they held several meetings and attended various church services as a part of their community building labor in helping the establishment of the Lamb of God Community Nadi.

Praise the Lord for all his work in Fiji and the whole World!

_____
Roger and Veronica Foley are leaders in the Lamb of God Community in New Zealand.