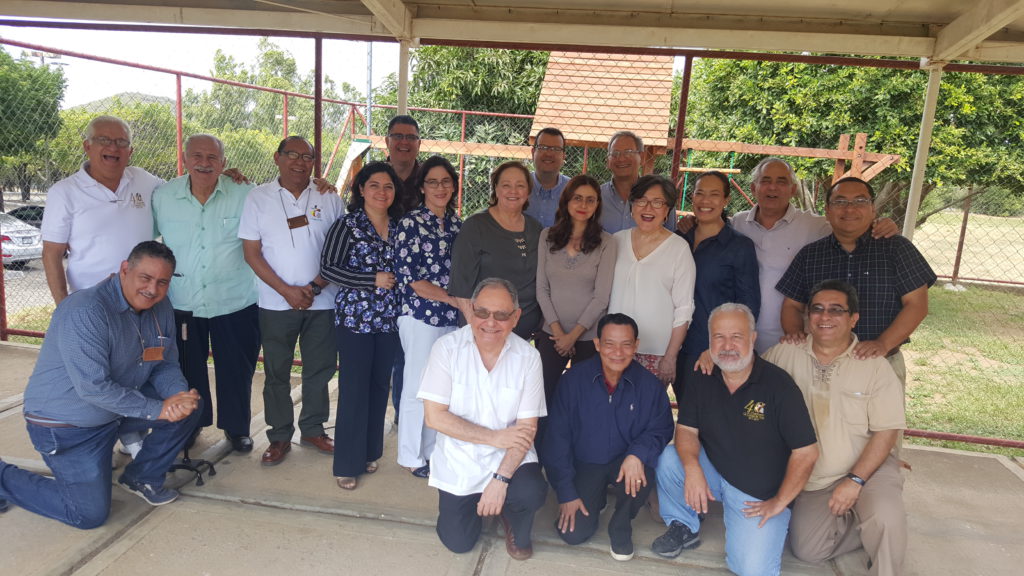 When did you community start? How did it happen? Who was involved? What inspired you?

La Ciudad de Dios began on the 5th of December of 1977 with the full commitment of its three founders: Carlos (Chale) Mántica, Enrique Cardenal, and Bayardo Reyes.

In August 1965 God took Carlos Mantica to a Cursillo where he met the Lord. He was encouraged to serve the Lord and for the next 8 years he served in the Cursillos World. He wrote many books about Cursillos and imparted it’s vision for leaders around the world.

On the 22nd of November, 1972 Carlos Mantica was returning from an International Cursillos Leaders Conference when the founder of Cursillos, Eduardo Bonnin, with whom he had a good friendship, invited him to take part of a leadership team that would be something like the Cursillos “thinkers” for the whole World.

There were many names on the table for people to join this team. Chale suggested someone called Steve Clark who used to work full time in the U.S.A. Cursillos Secretary and had some splendid writings about Cursillos. So Chale was assigned to write to him and invite him to that team. He did so as soon as he got back to Nicaragua.

Steve Clark’s answer arrived 9 months later. He informed him in the letter that he no longer worked for Cursillos. He shared some of his experiences in some Covenant Community he was leading and he sent him some books. Among these one of his own writing: The Life in the Spirit Seminars.

Carlos Mántica imparted the first Life in the Spirit Seminar in the Xavier Spiritual Exercises Home in December 1973 to a small prayer group of 8 people who were taking a Cursillo.

A few months later, in Carlos Mantica’s house, the first full 7-week Seminar was given to a group of 18 Cursillos’ Leaders and soon after to a second group of some 36 people.

In only one year the Renewal expanded throughout all Nicaragua. Almost 30.000 people were evangelized and received the Baptism in the Spirit.

Early in 1975 the Lord began speaking to Carlos Mantica about building a wall. Of course, he had no idea what that meant.

In July 1977 he received another letter from Steve inviting him to a Pastoral Training Seminar of the Charismatic Renewal in Ann Arbor.

It was a very boring seminar. Except for a conversation with someone called Mike Joseph from the Philippines who was assigned as his roommate. One night he said secretly: “Chale, the Lord is asking me to build a wall…” A what? The Lord was asking the same thing to someone on the other side of the World. There were already two builders. This same calling was replicated in many parts of the World.

At the end of the Seminar they prayed for deliverance over all the participants. It turned out that Steve wanted to greet Chale. He told him what the Lord had been telling them about the wall, he didn’t mention that the wall was the same Bulwark they were trying to build. But he said something that was confusing: “Chale, if the Lord decides to start a community in Nicaragua, I will personally go to Nicaragua to help you.”

The following morning it was as if a shining light had exploded inside of him. The prayer for deliverance and a new outpouring of the Spirit began to take effect. He experienced peace and freedom. He couldn’t understand how he had been capable of resisting the Lord’s calling to follow him. He experienced an infinite thirst and a great joy to do his will. He wanted to be my Lord and establish a covenant with me!

Sometime later, back in Nicaragua, not only did he know certainly that the Lord wanted to start a Covenant Community in Managua, but he knew all the steps he should take, and even what it should be called. It will be called The City of God!

Where are you located?

Cultural and linguistic characteristics: we are Spanish-speaking Latin-Americans from Central America.

How often do you meet, and in what configurations?

Small group meetings are every week.

We have a General Gathering (all sectors together) at the start of the year in “Sites of Jericho” (a full week), at the General Gathering of Pentecost, an annual fair, an Evangelistic Gathering (open, with a mass, preaching, worship and prayer for physical and spiritual healing.)

What do you as a community feel the Lord is saying to you just now?

The Lord has been revealing to us in the last three years about the tribulation. The time of which he had spoken many years ago, in the 60s decade, are already here.

He is asking us to stay in permanent spiritual warfare, defending our part of the bulwark and to be open to the arrival of people who will visit us looking for spiritual peace.

He is calling us to stay firm, to trust in him and no one else, and to remember his covenant and his power. We will see things we have never seen before.

He calls us to trust him and rest in him. This battle is shared with our SOS brothers around the World.

What areas of community life or service do you feel are a focus for the community?

What particular strength or call do you feel you as a community have been given by the Lord just now?

Why is it a help being part of the larger network of communities of the Sword of the Spirit?

Having a common identity, a same call in terms of mission, being part of a bulwark around the World, a shared way of life that is reflected in our culture: similar to the early Christian communities, a shared commitment, a common government and a common covenant.

If someone wanted to contact you, what’s the best way for them to do it?

We have a website: www.cdd.org.ni , or you can send an email to cddnic@netport.com.ni