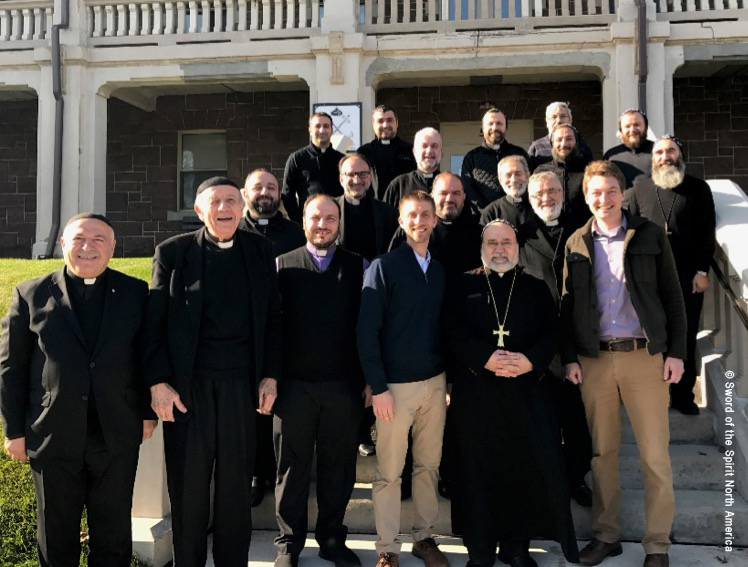 In December 2016, James Munk, the North American Region Kairos Director, and Ed Moccia, Saint Paul’s Outreach (a university outreach of the Sword of the Spirit) New Jersey Mission Director, went on retreat at the Mor Aphrem Center in New Jersey. They joined the clergy of the Syriac Orthodox Church Eastern US Archdiocese for a conference focused on improving youth work in the Archdiocese.

James and Ed made six one-hour presentations to the 18 priests and the Archbishop. These presentations outlined the Sword of the Spirit’s approach to working with youth.

–  Sword of the Spirit Theory of Youth Work

James and Ed stressed the importance of engaging the youth themselves in Christian mission, a key element of creating radical disciples. They suggested that the Archdiocese bring together some of their more committed young members to develop a strategy for engaging young people in the church.

Plans have already been made for subsequent connections. One of the priests from New Jersey will be visiting the Saint Paul’s Outreach chapter at Seaton Hall University, especially to observe the men’s household environment there. Another priest from Michigan plans to attend the Kairos YES! Retreat—he may even bring along some youth from his parish. There are many opportunities for joint action in the future.

James and Ed found great inspiration among the Syriac clergy.  “I was having lunch with one of the priests,” Ed said, “he shared with me how he had to flee Mosal, Iraq, when ISIS invaded 18 months previously and had recently immigrated to the United States.” “The men we met with, “ said James, “clearly love the Lord and want to do the best they can for their young people.  Hopefully, we can support them in this endeavor!“