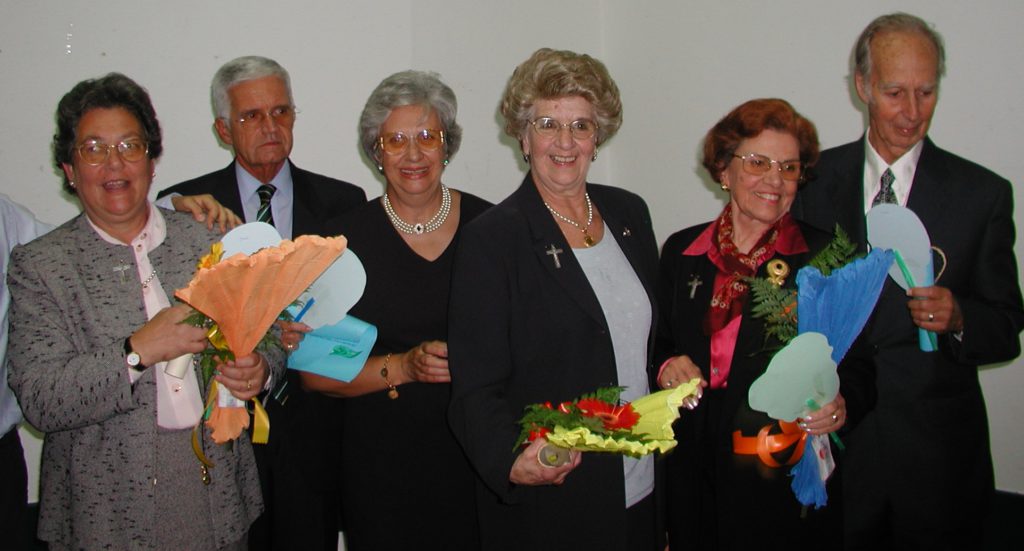 A Boa Nova in Lisbon – A Senior Citizens Start-up

Comunidade a Boa Nova  (the Good News Community) was founded in 1989 by 4 couples who came from  former Portuguese colonies, mainly Mozambique. The couples all belonged to the same Catholic couples sharing group and all felt they needed something more – a way of life that involved being more committed day to day. Our community didn’t start like many other communities with youth groups or young couples but with retired couples in their sixties who were searching for something more than just the sharing their faith.

They studied the Acts of the Apostles and went on a retreat together where the talks were all about telling others about Christ and about prayer. Soon after this retreat the four couples felt like they had an inner encouragement to meet every week to praise God in a more spontaneous way, to deepen their knowledge of the word of God and to more openly share their lives with one another. At these meetings they also studied works about charismatic life and worship such as Jesus Is Alive, The Cross and the Switchblade by David Wilkerson, Evangelization in the Power of the Spirit, and They Speak with Other Tongues.

These weekly meetings continued uninterrupted for a year and a half. The couples felt that they had been called to something, but didn’t yet know the Lord’s will. They realised that they needed something more, a qualitative leap in their Christian life. They contacted the charismatic movement in Lisbon, but it seemed to them that it wasn’t their call. The unrest and uneasiness persisted.

During this time of searching and questioning, one of our brothers – Fernando Freitas – wrote to Victoria, Spain, to his good friend, Fr. Arizti Victoriano, with whom he had worked in Mozambique in giving couses in Christianity. He told Fr Victoriano that the four couples wanted to know more about the community experience in Victoria.

The answer was short: Come and See.

Two couples went to Vitoria and lived intensely that Christian community life that had already started there in 1990, with about a hundred people. Their stay was enriched by the presence of five people who had been in Ann Arbor, Michigan, USA, in the late 1960s at the beginning of the charismatic prayer group there.

In February of 1990 the 4 couples went back to Victoria for another visit and attended the Life in the Spirit Seminars and experienced the outpouring of the Holy Spirit on them as individuals. Back again in Portugal, they felt a very strong sense that the Lord wanted to form them into a community with the characteristics of covenant community, that we now experience in such a strong way. They were all touched and blessed by the Holy Spirit in a very special way, and a short time later they began their own Life in the Spirit Seminar in Portugal to help others come to know Christ and the power of his Holy Spirit. Some 25 people attended their first Seminar in Lisbon.

From that moment on, our connection with Vitoria, Spain, has been very strong. The community in Vitoria, El Señorio de Jesús  (the Lordship of Jesus) have continued to be our spiritual parents. We still receive guidance and help from them.

In May 1993, on the day of Pentecost, after a community gathering that was full of joy, the senior coordinator of the community, Fernando Freitas, died suddenly. It was a tremendous loss for us because from the start he had been the encourager of our community and its undisputed leader. He was a man of  intelligence, charity, discretion and humility far beyond the natural gifts. He was a man characterised by a total giving of himself to others. Although his loss came as a huge shock to us,  we were able to carry on with the vision of covenant community, remembering his zeal and inspiration.

The brotherly and sisterly relationships we have with members of older and more mature communities and the knowledge and experience they share with us have helped and motivated us. The leaders’ teachings and international retreats and meetings reinforce the sense of belonging to the larger community of communities that is the Sword of the Spirit.

Our community is located in the outskirts of the city of Lisbon, on the picturesque Estoril Coast where we have our community centre, and all our members live in this area.

We have 71 community members of varying ages and from a wide range of professions: from kindergarten teachers to university teachers, architects, engineers, social workers, government employees, secretarial workers, economists, pharmacists, office workers, aides to the handicapped, accountants, psychologists, and more.

Our weekly community gatherings happen on Sunday afternoons, and we also meet weekly in smaller pastoral groups. These days we are focusing on running Alpha Courses to bring others to know Christ and experience the power of his Holy Spirit and working with our young people.

We believe that the Lord is calling us to move forward by going on mission, spreading the good news, bringing others to Christ, and loving one another.

By João Perloiro, senior coordinator of the community. João is an architect by profession.