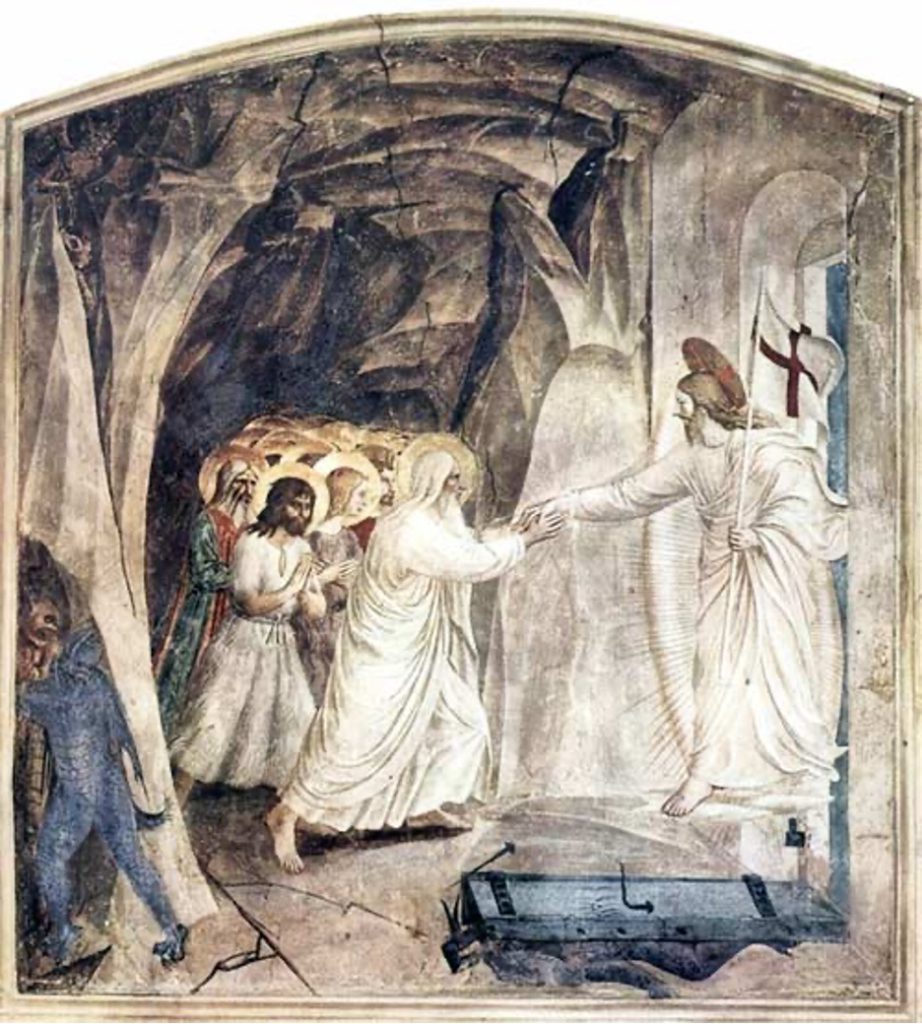 The Harrowing of Hell

What happened between Christ’s death on the cross and his resurrection from the tomb?

The descent into Hades

What happened between Christ’s death on the cross and his glorious resurrection from the tomb on Easter Sunday morning? The Scriptures tell us that the Lord Jesus holds the “keys of death and Hades” (Revelation 1:18). (Hades is also referred to in the Scriptures as the underworld and hell.) Paul the Apostle tells us that Jesus “descended into the lower parts of the earth” (Ephesians 4:9) – the lower parts were understood to be the “abode of the dead” and “Hades.” Peter the Apostle tells us that Jesus “preached to the dead” (1 Peter 4:6) and “to the spirits in prison” (1 Peter 3:18).

In a famous ancient church sermon which was preached on Holy Saturday – the day before Jesus’ resurrection, the scene of Jesus descent to Hades (or Hell) is vividly described. Jesus unlocks the door to Hades to announce his victory over death, Satan, and all the powers of Hell. He then releases Adam and Eve and all the just who were waiting for their redemption by the Messiah. A number of Christian paintings and icons, especially from the Eastern churches, vividly depict this scene.

The “harrowing of hell” refers to what Christ did when he descended to Hades or hell between his death and his resurrection. Specifically, the early church believed that after his death Christ descended into hell in order to rescue the souls of the just, starting with Adam and Eve, who had died under the Fall. When Jesus descends he beaks down the doors of hell, unbinds the prisoners held in chains, and then leads the just to their heavenly paradise.

Orthodox Easter icons do not portray the empty tomb which is the typical Easter scene within Western Christian art. Rather, the Easter icons of the Orthodox Church depict the event known as the harrowing of hell.In the Easter icons of the Orthodox Church two common motifs are often portrayed:  First, Christ standing over the broken gates of hell, angels binding Satan in the pit of hell, and Satan crushed under the gates of hell. Second, Christ pulling two figures up out of hell, Adam and Eve who have been imprisoned there after their deaths, along with all humanity, due to sin. Eve is generally depicted in a red robe.

Beyond iconography, the harrowing of hell is also the dominant symbol of Orthodox Easter liturgies. Again, in Western churches the empty tomb is what you will see depicted on Easter Sunday. But Orthodox services recreate the harrowing of hell. Specifically, the priest exits the church with a cross. The sanctuary is immersed in darkness and the doors are closed. The priest then knocks on the door and proclaims, “Open the doors to the Lord of the powers, the king of glory.” Inside the church the people make a great noise of rattling chains which conveys the resistance of hell to the coming of Christ. Eventually, the doors are opened up, the cross enters, and the church is lit and filled with incense.

18 For Christ also died for sins once for all, the righteous for the unrighteous, that he might bring us to God, being put to death in the flesh but made alive in the spirit; 19 in which he went and preached to the spirits in prison, 20 who formerly did not obey, when God’s patience waited in the days of Noah, during the building of the ark, in which a few, that is, eight persons, were saved through water. 21 Baptism, which corresponds to this, now saves you, not as a removal of dirt from the body but as an appeal to God for a clear conscience, through the resurrection of Jesus Christ, 22 who has gone into heaven and is at the right hand of God, with angels, authorities, and powers subject to him.

6 For this is why the gospel was preached even to the dead, that though judged in the flesh like men, they might live in the spirit like God.

8 Therefore it is said, “When he ascended on high he led a host of captives, and he gave gifts to men.” 9 (In saying, “He ascended,” what does it mean but that he had also descended into the lower parts of the earth? 10 He who descended is he who also ascended far above all the heavens, that he might fill all things.)

17 When I saw him, I fell at his feet as though dead. But he laid his right hand upon me, saying, “Fear not, I am the first and the last, 18 and the living one; I died, and behold I am alive for evermore, and I have the keys of Death and Hades.

One of the earliest written versions of the Apostle’s Creed is the Interrogatory Creed of Hippolytus (ca. 215 AD). Here is the section which refers to Christ’s descent to the dead.

I believe in Jesus Christ, God’s only Son, our Lord, who was conceived by the Holy Spirit, born of the Virgin Mary, suffered under Pontius Pilate, was crucified, died, and was buried; he descended to the dead (some translations use “he descended into hell” or “hades”). On the third day he rose again; he ascended into heaven, he is seated at the right hand of the Father, and he will come again to judge the living and the dead.

Don Schwager is a member of the Servants of the Word and author of the Daily Scripture Readings and Meditations website. This article was adapted from the version published in Living Bulwark April 2015 issue. Used with permission.