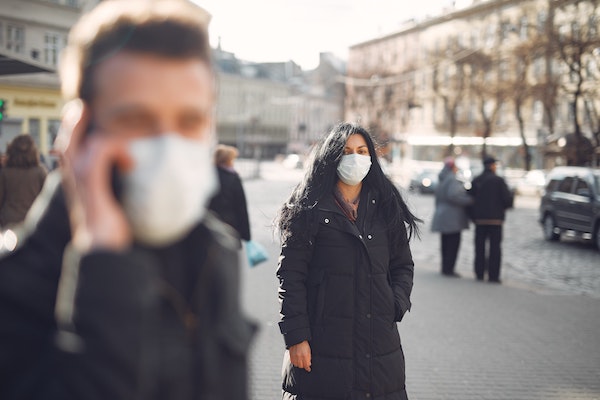 We are today faced with what appears to be a pandemic unprecedented in the rapidity of its spread. Daily we hear new and disquieting reports of the number of known infections and deaths, the lack of medical facilities to treat those infected – or even those who are most at risk. Daily we are subjected to differing but always alarming projections of the growth of the pandemic and its potentially catastrophic effects on the world economy. Predictions are common of a financial crisis to rival the Great Depression.

What are we as Christians supposed to make of all this? Is this – or in what sense is this – one of the “signs of the times” that we are supposed to look for? Is this a sign of the end times?

Let me say very clearly at the beginning that I am no expert on anything medical. I certainly do not know anything about COVID-19. My comments are only intended to provide some historical perspective and look at what Scripture has to say about a question like this.

C.S. Lewis’s essay “On Living in an Atomic Age,” written in 1948, just after the end of World War II, addresses the issue of historical perspective. His essay has, in the mad swirl of Corona virus concerns, been quoted and re-quoted on the internet by many Christians. Lewis said:

In other words, do not let us begin by exaggerating the novelty of our situation.[1]

First, the historical perspective of COVID-19. It is most certainly a serious health threat to very many and deserves to be taken seriously. But it is only one of many fatal threats we live with daily. In 2018 about 10 million fell ill with tuberculosis worldwide, and 1.5 million died of it.[2] In the Philippines alone there were an estimated 591,000 cases of TB in that year.[3] As of this writing (30 March 2020) The World Health Organization reports that as of 29 March 2,191have died of the COVID-19 virus in the United States.[4] From 2016 – 2019 an average of nearly 40,000 annually have died in auto accidents in the USA, and 4.4 million were injured seriously enough to require medical attention in 2019.[5] There were an estimated 562,500 cases of breast cancer in Europe in 2018.[6] The flu in its various forms (not COVID-19) kills between 291,000 and 646,000 annually.[7] Pandemics appear to occur about three times every century. “Medical historians tell us there have been nine influenza pandemics in the past 300 years. So, one in every 30 to 35 years or so, or roughly three per century, is everybody’s best guess about the future frequency of influenza pandemics.”[8]

Such an historical perspective can help us understand Lewis’s advice “…do not let us begin by exaggerating the novelty of our situation.” Of course, I am not advocating quiescence or social irresponsibility. We must take this pandemic seriously and we must offer a good witness as responsible, even exemplary citizens. That’s a given. But we also need perspective.

Second, the context of the Gospel teaches us that these sorts of disasters are not “special” or extraordinary warnings, but rather what we can expect always.

And when you hear of wars and rumors of wars, do not be alarmed; this must take place, but the end is not yet. For nation will rise against nation, and kingdom against kingdom; there will be earthquakes in various places, there will be famines; this is but the beginning of the birth-pangs Mark 13:7-8.

These warnings are not addressed to those who have received the Gospel: they do not need them. They have already been warned.

“Tell us, when will this be, and what will be the sign when these things are all to be accomplished?” And Jesus began to say to them, “Take heed that no one leads you astray.  Many will come in my name, saying, ‘I am he!’ and they will lead many astray. And when you hear of wars and rumors of wars, do not be alarmed; this must take place, but the end is not yet” Mark 13:4-7.

Jesus tells his followers that if they listen (if they “take heed”) to what he teaches, they need not be alarmed when all these things take place. He repeats his initial exhortation of verse 5 to “take heed”: in verse 9 “take heed to yourselves,” in verse 23 where he also tells them that they already know what they need to know, “But take heed; I have told you all things beforehand.”

Finally, is this a sign of the end times, of the imminence of the Second Coming? Here let me echo Lewis – “in one way” yes, and in another way no. In one way yes, because Christ has already told his disciples that in this age there will be constant warnings, many reasons to be alarmed if they (we) are not ready.

… the Lord knows how to rescue the godly from trial, and to keep the unrighteous under punishment until the day of judgment 2 Pet. 2:9.

That verse sounds harsh unless we recall what Peter also says a short while later:

The Lord is not slow about his promise as some count slowness, but is forbearing toward you, not wishing that any should perish, but that all should reach repentance 2 Pet. 3:9.

So yes, in one sense trials like the current pandemic are signs of the Second Coming, but signs for those who do not know the Gospel. And there are many, many such “signs.” As Lewis implied in his essay, it is all too easy for us to imagine that “the world has never seen anything like this before.” But throughout history there have been cataclysmic events that seem unprecedented. Just a few recent examples as reminders.

Yet in another important sense these signs are not signs for Christians, not signs that those who have received the Gospel should change their lives if they are living faithfully as disciples. Christians are told always to be alert, always ready for the Second Coming, for the Master’s return.

Take heed, watch; for you do not know when the time will come. It is like a man going on a journey, when he leaves home and puts his servants in charge, each with his work, and commands the doorkeeper to be on the watch. Watch therefore – for you do not know when the master of the house will come, in the evening, or at midnight, or at cockcrow, or in the morning – lest he come suddenly and find you asleep. And what I say to you I say to all: Watch” Mark 13:33-37.

Once again, Jesus tells his followers to take heed and to watch. Take heed precisely because “you do not know when the time will come.” Christ has already told them “But of that day or that hour no one knows, not even the angels in heaven, nor the Son, but only the Father” Mark 13:32. The point here is that our need is not to try to determine when the Second Coming will be, but precisely because we do not and cannot know, we must take heed and watch all the time. We must faithfully live out Christ’s commands to love God above all, and our neighbor as ourselves, in whatever circumstances we find ourselves. In the passage referred to earlier, Peter tells us this in the context of the return of the Lord.

But the day of the Lord will come like a thief, and then the heavens will pass away with a loud noise, and the elements will be dissolved with fire, and the earth and the works that are upon it will be burned up. Since all these things are thus to be dissolved, what sort of persons ought you to be in lives of holiness and godliness, waiting for and hastening the coming of the day of God, because of which the heavens will be kindled and dissolved, and the elements will melt with fire! But according to his promise we wait for new heavens and a new earth in which righteousness dwells. Therefore, beloved, since you wait for these, be zealous to be found by him without spot or blemish, and at peace 2 Pet. 3:10-14.

This surely is what Lewis meant when he said “…as you would have lived in the sixteenth century….” We ought always to be living as those who expect the Master’s imminent return and are therefore awake, alert and doing what the Master assigned them to do…

Let your loins be girded and your lamps burning and be like men who are waiting for their master to come home from the marriage feast, so that they may open to him at once when he comes and knocks. Blessed are those servants whom the master finds awake when he comes; truly, I say to you, he will gird himself and have them sit at table, and he will come and serve them Luke 12:35-37.

If we are not living “lives of holiness and godliness” then we ought to take these disasters as a call to wake up, to take heed, to carry out our duties faithfully, to love God and our neighbor – but not to be alarmed.

As I was writing this, my brother John pointed out that this can also be a graced opportunity for mission. Recalling sociologist Rodney Stark’s book, The Rise of Christianity,[10] John said

Plagues and natural disasters were a major cause of depopulation. Stark agrees with some ancient Church Fathers that epidemics and plagues were a major contributing cause to the success of early Christianity. Such events cause a great deal of social dislocation, opening up new avenues to faith. Here he argues that the content of the Christian faith and the way they cared for one another was a major reason for the success of their mission:

“Thus, at a time when all other faiths were called into question, Christianity offered explanation and comfort. Even more important, Christian doctrine provided a prescription for action. That is, the Christian way appeared to work.” (p. 82)

Urban chaos in the Roman world that also played into the hands of Christians. Stark paints a devastating picture of the state of Roman cities, with populations averaging what Calcutta is today in terms of density—and even worse in terms of cleanliness and disease:

“Given limited water and means of sanitation, and the incredible density of humans and animals, most people in Greco-Roman cities must have lived in filth beyond our imagining” (p. 153).

The coronavirus pandemic is unquestionably a tragedy, not only by sickening and killing many, but by the enormous burden it has put on health care services, the social dislocation it is causing, and the economic chaos and financial stress it has brought. Surely it is a dark time.

But Christ called His followers to be the light of the world. Who needs light if it is not dark? In the midst of this crisis let us not turn protectively in on ourselves. Christian community life and the presence and power of the Holy Spirit provide us with resources for mission, for comforting those in sorrow, for bringing hope to the hopeless, for sharing our material resources with those in need. Let us do that now.

Bruce Yocum is a member of the Servants of the Word and a former member of the International Executive Council of the Sword of the Spirit. Copyright: Bruce Yocum © 2020. Used with permission