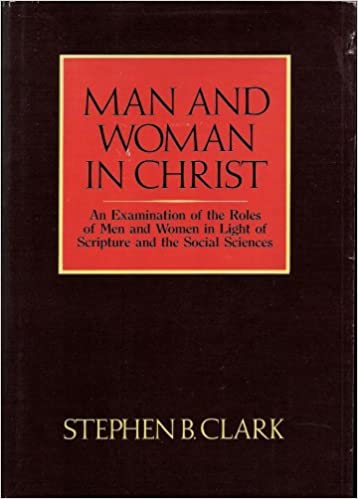 In the mid 1980s a young Southern Seminary student named Albert Mohler was walking across the campus quad with the esteemed professor Dr. Carl F. H. Henry. At one point, the professor asked the student about his views on men’s and women’s roles, and the young student replied with his view, which was then fashionable among Southern Baptists, that all roles and offices in the church should be open to both men and women. The older Dr. Henry looked over to Mohler and told him that some day he would be embarrassed to believe such a thing. Dr. Mohler once told the next part of the story this way: “My friends, the day that Dr. Carl F. Henry tells you that you’ll be embarrassed for believing something is that very day.”¹ That night Mohler went to the campus library and searched through the collection, trying to figure out what Dr. Henry meant. After staying up all night reading and studying, Mohler emerged the next morning transformed. He had found a book which powerfully explained and defended, from Scripture itself, the traditional view on the roles of men and women. He had been convinced of the scriptural teaching.

Dr. Mohler had found a large tome published in 1980 by a small Ann Arbor, MI publishing house, written by the Charismatic Roman Catholic author Stephen B. Clark, and titled Man and Woman in Christ: An Examination of the Roles of Men and Women in Light of Scripture and the Social Sciences. Thirty-nine years since its publication this book remains incredibly relevant, filled with unexpected insights and raising questions of application that we still have not resolved today. Though labored in places, Clark’s writing often has a freshness and vitality that is difficult to describe, as well as a deep connection with real life the way people actually live it.

Clark’s book is divided into four sections which 1) exegete the scriptural teaching on the sexes, 2) show how this scriptural teaching was applied in the culture of the first century AD, 3) consider the challenges and prospects for applying the scriptural teaching to modern society, and 4) make practical recommendations. Clark’s exegetical work feels at once familiar and foreign. Familiar, since pieces of it have become the standard complementarian reading, but foreign because it is embedded in a larger social and theological framework. Clark goes to great lengths to show how the Bible presents its teachings on manhood and womanhood as permanent instructions for how humanity is to live together and flourish, instructions grounded in both creational and redemptive realities.

Complementarian readers can benefit from two distinctive features of Clark’s book generally not found in later works: 1) a comprehensive survey of social science findings regarding sex differences and their relation to the biblical teaching, and 2) a study of how manhood and womanhood are realized in the different social structures of the first century vs. the twentieth century.

Nearly 100 pages of the work is devoted to a survey of social science findings regarding sex differences between men and women. Clark demonstrates at length that social scientific methods do show significant cross-cultural sex differences and he addresses common objections like “aren’t these differences just cultural?” and “doesn’t it just depend upon how boys and girls are raised?” For example, across all cultures and ages, men are somewhat more interested in accomplishing goals and women are somewhat more interested in caring for personal needs. Men are generally more aggressive, form broader and shallower social groups, and are stronger in visual-spatial reasoning. Women, on the other hand, are generally more nurturing, have stronger verbal abilities, form smaller and deeper social groups, and experience more anxiety. These natural differences lead to universal social patterns in which, “women bear primary responsibility for domestic management and the rearing of young children…[and] men [have] a primary responsibility for the government of larger groupings within the society” (413).

This only scratches the surface of Clark’s analysis. Overall, he shows the deep harmony between the created natural structures as we observe them through the social sciences and the biblical teaching about manhood and womanhood. He writes “these differences do not surface randomly, but instead cluster in a coherent pattern” (439) which fits the social roles God assigned to the sexes in creation. It strengthens our understanding of God’s purposes in the world to see that man and woman together are creational realities, felt and realized in lived experience. Clark’s assessment is not reductionistic, but rather is carefully nuanced, insightfully connected to the biblical account, and has been confirmed by more recent social scientific studies.²

The second distinctive contribution of Clark’s book is his examination of societal differences between the first and twentieth century, along with the complexities of application that these differences create. In the first century, the family, church, and society were thought of as a network of personal relationships. The church was a community rather than a functional service provider. It wasn’t a building where consumers could come to receive religious services. It wasn’t organized through programs administered by employees. Church leaders were, instead, heads of a community of persons in real relationship with one another. Their titles were “shepherds,” “overseers,” and “governors.” Their government wasn’t tyrannical, but it was personal—more like a father than like a courthouse clerk. The church was a family—the household of God. Insofar as the church ceases to be familial and instead becomes consumerist or commercial, different roles for the different sexes will make less and less sense.

Instead of community and hierarchy being in conflict, Clark compellingly shows that true biblical community requires and benefits from hierarchy. Subordination of some members to others ensures a unity within the grouping. When a head governs and a body complies there is a true unity present between the parts. Having a functional head, to which the other parts are subordinate, enables the whole to act cooperatively.

Clark insightfully assesses how the application of the biblical model to the twenty-first century is fraught with difficulty. In a society where impersonal job descriptions have replaced personal relationships, it is hard to see how to implement the biblical model. Clark acknowledges that when the household functions are outsourced (education, nutrition, food production, clothing production, counseling, health care, elder care, etc.) it does not automatically make sense for women to stay out of the wage economy. Women want to work at those caring activities, and we all have to deal with the real limitations of the society we are born into. Though he wrote well before The Benedict Option, Clark recognized that a key way forward was for the people of God, in whatever counter-cultural communities they are able to establish, to seek to live out the biblical model. A restoration of household functions is an integral part of that renewal project. The results will be a more human way of living, one in accordance with our maker’s intention, and which produces satisfaction in the lives of His people.³

Forty years after its original publication, Clark’s book remains a valuable resource both for understanding the timeless truths of our manhood and womanhood as well as living out their reality in our twenty-first century context.

³For more on the changing of the household from a pre-industrial to post-industrial form see Allan Carlson, The Natural Family Where it Belongs, Transaction Publishers, 2014.

This book review by David Talcott was originally published on June 8, 2019 by © The Council on Biblical Manhood and Womanhood. Used with permission.