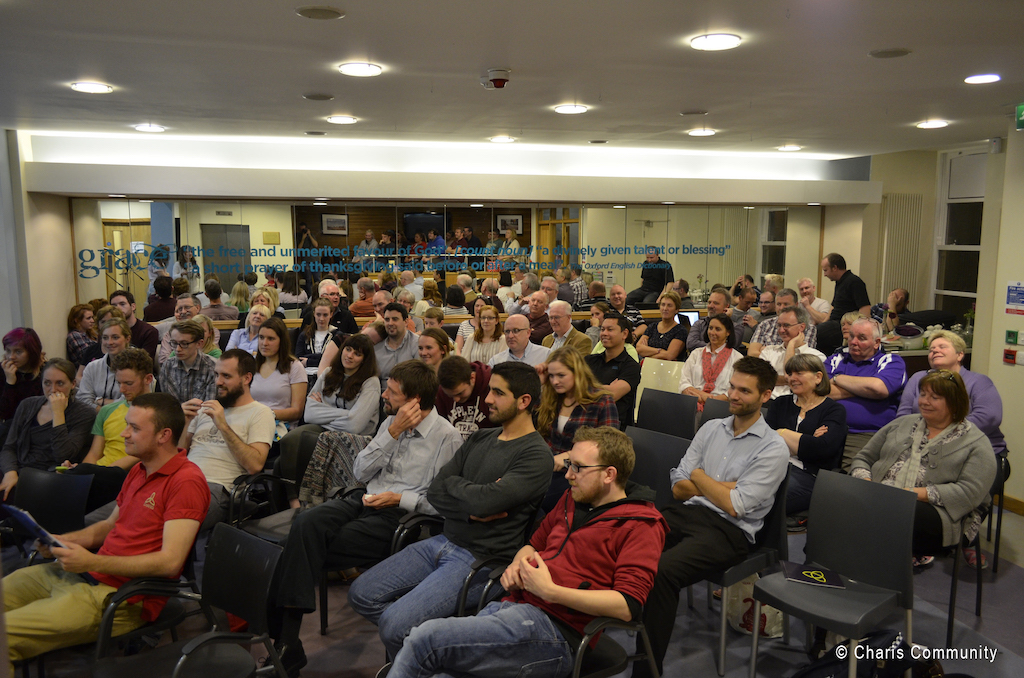 The Call of Charis

Charis is an ecumenical Christian community in Belfast, Northern Ireland. This year we celebrate our 25th anniversary, but the roots of Charis go back over 40 years to the early days of charismatic renewal in Northern Ireland.

From the very beginning of the charismatic renewal in Northern Ireland, the Holy Spirit worked to bring Christians from different denominations together, and in the autumn of 1972 charismatic prayer meetings began in West Belfast and Queens University Belfast. This was in the context of a society that was riven by division between different Christian denominations and was in the middle of a long period of religious and political violence known as “The Troubles.”

In 1979 a small Roman Catholic group in West Belfast, who had had some contact with the Word of God community in Ann Arbor, Michigan, merged with a Protestant house church from East Belfast to form a community called Belfast Christian Family. This was a remarkable occurrence, coming as a result of a strong prophetic sense of the call of God to be an ecumenical witness in which its members remained faithful to their own traditions while living out a covenant commitment to one another.

In parallel with these events, and also as a work of the Holy Spirit, a Presbyterian youth group in Belfast prospered, grew, and became the Community of the King.

Both of these groups continued to develop closer relationship with the Sword of the Spirit and, as a result of ongoing guidance, Belfast Christian Family dissolved and joined Community of the King en masse, in 1987. In this same year the Servants of the Word, a celibate missionary brotherhood within the Sword of the Spirit, established a household in Belfast.

The newly constituted Community of the King in this period grew to around 400 members, both Catholics and Protestants. University work was active, and the many households in the community gave young men and women the chance to learn about radical discipleship in an ecumenical context.

During this time, two of the Servants of the Word began to work with young people from West Belfast, and out of this a highly successful cross-denominational organisation for young people called Youth Initiatives was born. This work proved an important contribution to subsequent community growth as young people in Youth Initiatives became serious Christians and were attracted by radical Christian community life. As adults many of them joined the community.

In 1990 there came a time of challenge and uncertainty in many parts of the Sword of the Spirit. The outcome of this in Belfast was that a small group left the Community of the King and began to meet with one another informally. In due course, with the support of the Servants of the Word household, a community was formed which in time adopted the name Charis, a Greek word that means “grace”.

The members of this group included some people from the original West Belfast group, some people from Belfast Christian Family and a few others from the Community of the King. A common bond for these people was the strong desire to live in ecumenical covenant community in relationship with the international network of communities, the Sword of the Spirit. Support from international leaders in the Sword of the Spirit was vital for us during this time. Another important factor in these early days of Charis was a previous decision by several members to live close to one another in the same neighbourhood in what we call a community “cluster”.

A long and tortuous journey for many of us came to fruition in 2000 when a small group of around 25 people made a public commitment to one another as members of Charis, and later that year, at the Sword of the Spirit’s International Coordinators Meeting, Charis was accepted as a full-member community of Sword of the Spirit.

Today Charis has grown to 52 publicly committed members – including four lifelong members of the Servants of the Word, one of whom is Irish – and 26 underway members. There is also the blessing of 49 children! A recent official visitation team from the Sword of the Spirit pointed out that although the community might still be considered quite small, the growth rate in recent years has been similar, in percentage terms, to the first 200 years of the Christian church!

Charis runs a vibrant outreach to university students (called UCO – University Christian Outreach). We’ve also worked hard to help our children and young people move to adulthood with a vigorous Christian faith and an understanding of the call to Christian community in the Sword of the Spirit. Some 40 young men and women are in Christian formation among us – many of them our own children. We are truly blessed.

Our priorities going forward are to maintain our missionary zeal and to keep a firm ecumenical focus in our community life and outreach. We also consider ourselves to be a major stakeholder in the growth of the Sword of the Spirit’s European Zone, as we plan to start a missional community in the city of Derry/Londonderry in Northern Ireland.

If someone would want to learn more or get in touch with the Charis Community they can visit our website www.chariscommunity.co.uk.