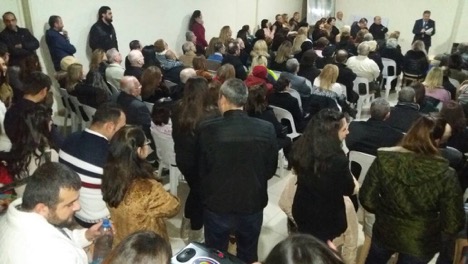 Update on “Emmanuel” in Aleppo.

“For we are the aroma of Christ to those who are being saved and those perishing” 2 Cor 2:15

Remaining steadfast, working with great zeal
More than a year has passed since the cessation of fighting in Aleppo.

During the Christmas season of 2017, the churches in Aleppo were filled with worshippers and those eagerly wanting to see the decorations; specially the beautifully ornamented creches.

For their part, our brothers and sisters in Emmanuel had been sustained throughout the year by a new hopefulness and optimism coupled with faith. This had been evident to those around them and those of us in Lebanon who meet with them. Yet, it is important to remember that such steadfast faithfulness under the difficult circumstances in Aleppo, usually does not come easy.

Yet the Christmas hymns from children’s groups and their families going through the streets, was a very inspiring and telling sight to see. Who would have thought that the city, battered on every side a short while ago, could begin to rise again from its ashes.

The Present Situation
After the battles ended, hundreds of thousands of refugees and internally displaced persons returned to Aleppo. According to some unconfirmed reports, hundreds of factories of different sizes returned to production as electricity supply increased. In the formerly divided city’s western neighborhoods where Emmanuel members reside electricity has been mainly restored, but no one knows how long that will last or at what level of frequency it will be provided to residential households. When in Aleppo, one cannot miss noticing some visiting delegations that are there to offer help with the reconstruction.

Current numbers of Christians in Aleppo.
From a high of 250,000 Christians as of the beginning of the civil war, the number had decreased to less than 100,000. A large community of Orthodox Christians belonging to the Armenian Apostolic Church and the Syriac Church still operate in their respective houses of worship. There is also a large number of Eastern Catholic Christians in the city: Melkites (Greek Catholic), Maronites, Chaldeans and Syriac Catholics.

Emmanuel moving to a new locale.

During the course of 2017, we in the People of God community in Beirut Lebanon, have watched with great joy our friends in the “Emmanuel” community continuing to reach out to others, inviting them to their larger gatherings at a local church, and carrying many programs of formation for all ages. Emmanuel is a busy group!

Five months ago, they started meeting at a Greek catholic church hall. This location is large and safe and is put at the disposal of Emmanuel by the local bishop. There, the community and its outreach average about 10 activities per week ranging from small group meetings to a large gathering twice a month. The pastor there, is an enthusiastic member of Emmanuel.

Love is precious and costly
Members continue to witness with their daily lives for Christ. While many Christians have fled the city, people around them wonder why they still stay. They witness not only by the example they give to their friends and coworkers but also by sharing how their lives were changed since encountering and being changed by Christ.

One sister shared how in the company where she works, the overwhelming majority are Muslims. There, she is entrusted with the delicate job of head accountant despite her relative young age. She routinely encounters resistance from male coworkers that are more senior than her, yet she deals patiently in love with everyone and does her job responsibly. Her coworkers, ask her about her tolerant attitude when provoked; and she replies that it is the power of God at work in her. When the company was faced with a major crisis, her boss, who trusts her maturity, confided in her that the reason for the trouble is that we “lack love for each other” knowing that she would understand that. She holds her ground by her prayers, her seeking God’s glory in her life and her patience. “People who know me before can see the change in my life and are touched by it”, affirming that it is God’s grace in her.

A war widow’s testimony is like sweet aroma for many
Another sister in the community, widowed when she lost her husband to a rocket explosion, has shared her story. She says she was changed as a person since she joined Emmanuel and affirms that she has personally grown so much that it is evident to everyone around her: her closest relatives and her children clearly see the change.

She is also experiencing a new compassion for others in her work of helping other widows: Specially those displaced from their homes.

As she gives her witness, one can hear a deep sense of seasoned joy in her voice.

“The grace of God helps me as a widow, especially when faced with difficulties. I found a wonderful friend in God”;

Then she chokes on her words as she quotes 2 Corinthians 2:14-15, But thanks be to God, who in Christ always leads us in triumph, and through us spreads the fragrance of the knowledge of him everywhere. For we are the aroma of Christ among those who are being saved and among those who are perishing”.

She goes on to say: “Every time I help wipe a tear from someone’s sorrowful eye I am filled with great consolation”.

Love is sacrifice
A young woman relates how she and her husband feel strongly about remaining in Aleppo. She says: “It is clear for us that God wants us to look at our country and city not as a hotel to stay there at will and as long as it is comfortable and pleasant: Our city is given to us, to live in it and serve others, during the good times but especially during the difficult times”.

Love for unity
Emmanuel has always worked and prayed for greater unity among all Christians. Members include Catholics of different rites as well as Armenian Orthodox, Greek Orthodox and Syriac Orthodox. During the week of prayer for Christian Unity they came together for prayer and fellowship with another lay group with the same desire for unity. The bishops in the city all support this openness among their flocks.

Reaching out to those who are not Christians. Encountering hatred with love.

When asked whether they can reach non-Christians through their witness, some members excitedly share that through direct or indirect ways they reach out fruitfully. In the case of a need for baptism, that usually has to happen far away from the individual’s city to avoid persecution by those closest to the person.

A brother tells how he makes it a point to use his everyday activities to share the gospel. He starts by sharing the radical change he experienced after years of living with violent anger and alcoholism. He says that the command of loving our enemies took a very fresh meaning for him after his encounter with Christ. When speaking to non-Christians, he argues against extremism by showing the face of a loving God who does not condone hatred and murder.

Another brother tells how in his job, in an area known for its Islamic fundamentalism he encounters many Muslims. In this neighborhood, the residents have generally never come into contact with any Christians and thus have the predisposition to think that they are unbelievers (infidels) who have adopted a religion that is imported by “foreigners”.

As part of his job, this brother was asked to build a Center for social relief services. After some time, the residents, having been touched by his work and silent witness, started asking him: “How come you Christians come to offer material support and build something so useful for those (of us) who have hurt you, blocked food supplies from reaching you, and shelled your areas with rockets; and how is it that now, you come to ask us about our needs for food, education and health”?

The brother’s reply is very telling: “This is what our Lord Jesus Christ has taught us, he has come to save men and to give us abundant life. We offer good things in His name to spread good will and love on this earth”.

The man’s wife happens to hear what her husband says and adds: “I personally have come to thank God for the troubles and difficulties my family and I went through in Aleppo. These circumstances have caused us to be greatly enriched”. She goes on to say that she feels enriched by the love of the brethren and their care as well as by a greater trust in the Lord. It is worth noting that this husband and wife had the opportunity to emigrate outside Syria three years ago but chose instead to stay in the city.

Looking forward to a great year ahead.
The year 2018 is shaping up to be another year of growth and of deepening the sense of mission for Emmanuel.

Three recurring themes are being learned and will be meditated on during the year.

Holiness, testimony and mission. The strong ties that we the People of God have with Emmanuel continue to be very fruitful to both communities. The young people are especially the ones who are benefitting from this. We pray that Emmanuel will continue to give a shining example in holiness, testimony and mission and that we in the Sword of the Spirit never fail to support them in prayer and every way possible.

Many of us in the Sword of the Spirit started in our late teens and now more than forty years later we are passing on the torch to younger generations.

The leaders of Emmanuel are very gifted and capable individuals who could succeed anywhere in the world, yet they chose to be part of this rewarding and at the same time challenging mission.

Dear Friends of Emmanuel: Please continue praying that the year 2018 would be full of God’s action among the people of Aleppo and Emmanuel community. They continue to greatly appreciate your ongoing prayers and support!